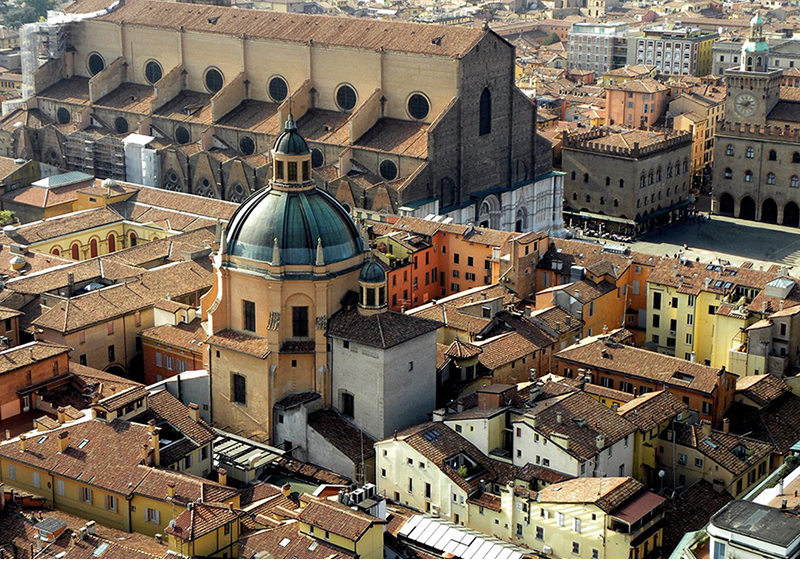 PAOLO CASTELLI’s
story is a wonderful one,
and it originated in an extraordinary
territory and among…
the streets of BOLOGNA

The history, the aesthetic taste, the intellectual excitement and the dedication to create beautiful things characterize Bologna and its province, and the company of Paolo Castelli is a perfect example of how a territory can give inspiration and character to those who were born and still live there.

Built entirely using a single type of brick, Bologna is a city that encloses traces of the Iron Age, of the Etruscan civilization, and of the Roman era. The city of Bologna is the quintessence of Italian culture, and for this same reason, we will talk about its symbolic places to fully enjoy its beauty. Founded in the early 11th century BC Bologna soon became a reference point on the Italian scene and beyond, as well as the main seat of the oldest university in the Western world, the Alma Mater Studiorum.

ALMA MATER STUDIORUM
Let’s start our walk right from the University of Bologna. Inaugurated in 1088 as a symbol of the city’s economic and cultural growth, internationally renowned doctors and scholars

have studied and taught in the Alma Mater Studiorum over the centuries, hence the nickname “The Intellectual”. It was also thanks to the help of its students, who from the beginning collected offers of money to compensate the teachers, that the University could gain its recognition. Indeed, students believed that science, as a gift from God, could not be sold and purchased.

ARCHIGINNASIO
Not far from the university you will find the Palace of the Archiginnasio, built between 1562 and 1563 at the behest of Cardinal Carlo Borromeo, with the aim of bringing together university teaching in a single location, and since 1838 it houses the Civic Library. Filled with frescoes, the Stabat Mater Room is famous for its library and its entirely painted walls.

PIAZZA MAGGIORE
This square is the focal point of the city. Connected to the central station by via dell’Indipendenza, Piazza Maggiore is the perfect place to sit and admire the surroundings; North of the square stands the Fountain of Neptune, one of the main symbols of the city, while East, West and South, respectively, the

GARISENDA AND ASINELLI TOWERS
The two towers, as people from Bologna address them, are located in the heart of the city at the point

where the ancient Via Emilia entered the city. Built during the Middle age with military function, the two towers were used as a point of signaling and defense from possible enemies. The height of the Asinelli Tower, 97,20 meters, represents the social prestige of the family that had the two towers built, the Asinelli family. Only one out of the two towers can be visited.

I could make a very long list of the beautiful and tasty things
that you can find in this territory, but for me, the Tortellino is an
indisputable strength of the area and of Italian cuisine.
Tortellini are worth the trip to Bologna, since here in Emilia-Romagna people really know how to make them.

If you wish to bring to your table
BOLOGNA and EMILIA-ROMAGNA,
then here is the traditional recipe for you!

Rest the loin for two days with a mixture of salt, pepper, rosemary and garlic on top, then cook it over low heat with a little bit of butter and remove it from the pan and clean it of its mixture. On a cutting board, chop the loin, the ham and the mortadella very finely and mix everything with the Parmesan and the eggs, adding a sprinkle of nutmeg. Mix the dough for a long time until it is well blended. Leave to rest for at least twenty-four hours in the fridge before filling the tortellini. To obtain the shape of the Tortellino: cut the pastry into small squares of variable size between 2.7 and 3.8 cm, fold them in half in a triangle and twist it around the finger to give it the classic shape. If you have time, make your own broth! Put a free-range capon and parts of beef, suitable for making broth, in a pot with one onion, celery, a few small tomatoes and a couple of carrots, pour water, add salt as needed and when it starts to boil cook over low heat for two-three hours. Pour the broth through a colander and discard the vegetables. Put the broth back in the pot and when it boils add the Tortellini. Usually, Tortellini take a few minutes to cook, I would say a minute from the moment they come to the surface.

When it comes to savoring the goodness of Emilia-Romagna cuisine, then Lambrusco wine cannot be missing on the table. Lambrusco di Sorbara Leclisse Paltrinieri goes perfectly with tortellini, boiled meat and salami. All these flavors blend in perfect harmony with the wine notes of white flowers, red apple peel and aromas of raspberry and vanilla.

Should you need any ADVICE
on WHERE TO EAT or WHERE TO SLEEP in BOLOGNA
we will be more than happy to help you!

Alessandra Biagiotti
We search and propose what we find in Italy and Europe that we consider beautiful and of the highest quality, for homes and your lifestyle!

When searching for small objects, practicality is

I love Jack valet trays all over my house. The lar

Mirrors bring energy into a space, especially near

I love this mirror from the Best World collection

Good lighting can change my mood, and mirrors are

Timeless pieces are always a great idea as gifts!

Christofle imagined a table with friends and famil

Packaging is so important for me when gifting some