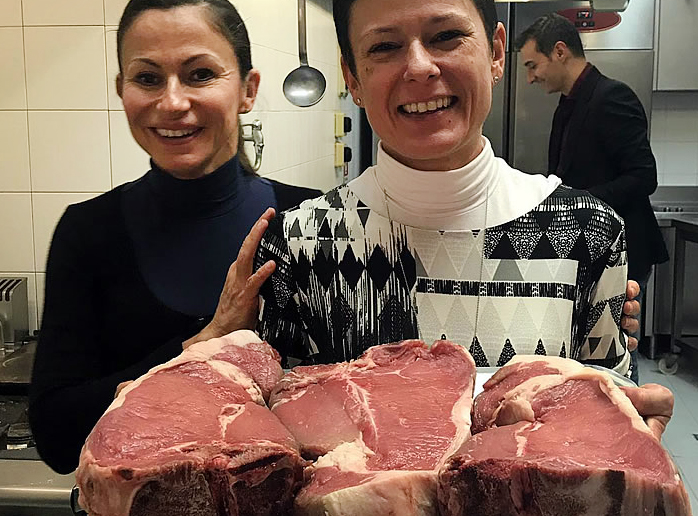 There is a special place in Florence where
you can eat well and feel like you are home.
Since 1956, the Buccioni family has been offering genuine
dishes from the Florentine and Tuscan culinary tradition,
with a passion and simplicity now rare to find.

In 1956 Valerio Buccioni, along with his father Sabatino and his mother Fidalma, took over the trattoria calling it “TRATTORIA SABATINO”, fully preserving the folk character of the place, which had been distinguishing the activity in the San Frediano neighbourhood, in Florence, for many years. Many years, indeed, considering that already in the early 1900s, the place served as a popular canteen-trattoria and, going back in time to the 1700s, as the refectory of a former nunnery.

When I am inside SABATINO I find a familiar atmosphere, where a smile and a spontaneous greeting are never missing, not even when they are all running with the Trattoria packed full of people! I like SABATINO because it kept the neighbourhoods’ folk atmosphere, with a cuisine reminiscent of grandmothers’ kitchen. Prices are kept low, by choice: a Trattoria where you can often go to eat and feel good, without overthinking. At present, it is not so easy to find a delicious typical home cooking.

I find one of SABATINO’s strengths to be precisely that: the commitment of Laura, with her daughters Ilaria, Letizia and her son-in-law Massimo, has remained faithful to traditions and they respect their history to repropose it every day.

The menu changes every day, following the seasonality of the ingredients and festive traditions. In winter you won’t find strawberries, but you can be sure that the holidays traditional sweets, when the right time comes, will all be there! Since 1956, TRATTORIA SABATINO, first in its old location in Borgo San Frediano, and now in Via Pisana, right below Porta San Frediano, has also witnessed the history of the neighbourhood with a “coming and going” of people of all kinds: habitué, tourists, workers, well-known personalities and ordinary people, all often sitting at the same table.

The stories and anecdotes on San Frediano are fun and exciting for anyone who loves the neighbourhood, but also for those who wish to find out about Florence in the past and how Florentines used to live.
At present, Trattoria Sabatino still embodies the authentic character of San Frediano, and that’s why I suggest you have a stroll in the neighbourhood on a sunny day and stop at Sabatino for a family lunch.


Our FAVORITE RECIPE to end a meal
in PERFECT FLORENTINE STYLE:

BAKED PEARS
in wine and sugar!

Rinse the pears and place them standing upright in a baking pan. Generously sprinkle over the sugar. Pour halfway a mix of half water and half red wine. Cover the baking pan with foil and bake in a well pre-heated oven for 90 minutes. Baking time might vary depending on how ripe the pears are.

With such a wide variety of decors and color combi

Iris by Marie Daâge is a stunning hand painted se

It is always so interesting to go behind the scene

What a joy to be surrounded by bright happy colors

Rebecca by Alessandra Home Moods is an Italian lin

I like it as a throw blanket as well, both indoor

Products that make me feel good! I really like to

The Extravecchio DOP classic balsamic vinegar by A

Love to experiment when I cook, and so I thought o

The book about
TRATTORIA SABATINO
by Ilaria Buccioni