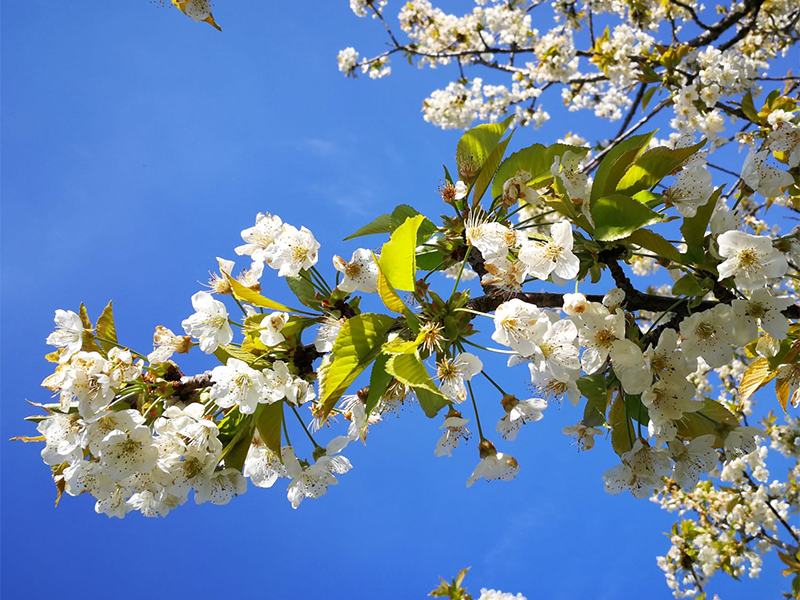 On a beautiful
SUNNY DAY…

There is a Cherry tree in front of my window. When the sun tries to brighten up my office in the morning, the tree mitigates its light by deciding which ray of light to let in and which one to screen, in reds or greens. Who knows how many cherries there will be left for the owners of the garden, given that two blackbirds have targeted those colored spots and, with a painstaking work, always arrive to the core.

Next to the cherry tree, a Jasmine plant covers almost the entire wall. Its scent wakes me up in the morning and follows me throughout the day until evening, when I go to sleep, therefore being my first and last thought of the day. When Spring gives way to the summer heat, the sunlight is so strong that it breaks through the house, making the huge Acacia tree crucial  for getting a break in the shade.

A shade that has allowed the grass to remain green, as where the sun hits, yellow is the predominant color. Surprisingly, the Jasmine plant resists the heat and the wall of the neighbors’ garden remains green and strewn with a tide of white stars that illuminate the day even more than the sun.

This colorful Spring and Summer air has been sung and played by so many musicians, that gathering them into just two playlists was a tough job. Singing birds, flowering trees, perfumes, sea and sun are among the most used words in our songs about Spring and Summer. So here goes the text of April in Paris (here in its instrumental version with Count Basie‘s orchestra): “April in Paris, this is a feeling that no one can ever reprise …”. Ella Fitzgerald sings “But i feel so gay in a melancholy way that it might as well be Spring” in the song It Might As Well Be Spring by Richard Rodgers and Oscar Hammerstein written for the 1945 musical State Fair.

The elegance and softness of Chet Baker‘s trumpet add a hint of sadness to Spring in I’ll Remember April,  a sense of nostalgia instead pervades the wonderful song Aguas De Março by Tom Jobim, since in Brazil the rain in March represents the last memory of summer. Joy Instead is the emotion that fills this modern version of Here Comes The Sun (by the Beatles) by Jacob Collier together with the young English singer-songwriter Dodie.

When Summer comes the explosion of colors, images and scents continues, but now the sun takes over and new feelings seem to bloom with it. And so, we celebrate love in all its forms: from the lullaby Summertime to the enchanting beauty of the girl on Ipanema beach. Summer can be painful when a love story that seemed everlasting, does end, like sung in Era D’estate, but it can also be welcoming and positive as in It’s A Good Day. Images keep coming to our minds until we arrive at the beautiful description of a boat traveling on a hot sunny day in O Barquinho. Summer gifts us with unforgettable sunsets and gives a good scent to all flowers, but Bruno Martino hopes it will pass quickly to erase the memories of a love long gone.

Our passionate expert for the
MUSIC section!