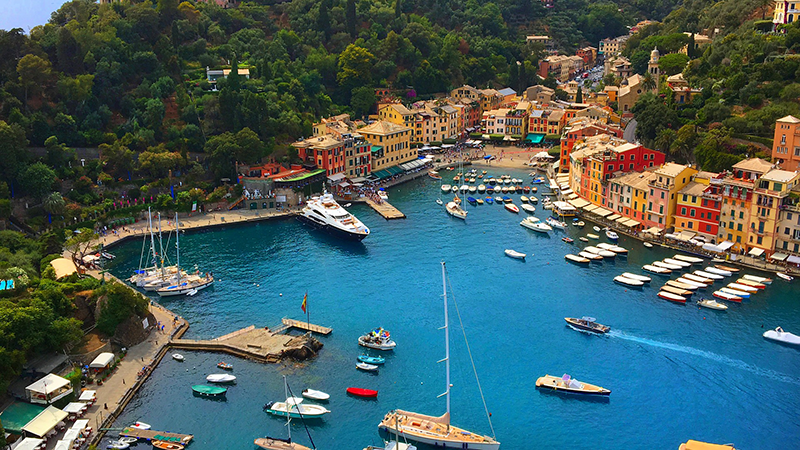 From GENOA to PORTOFINO
one hour drive to visit a place like NO OTHER!

PORTOFINO is one of the symbolic places of Liguria, with its colourful houses overlooking the sea, synonymous with elegance and grace. The small village can be reached by car or also by boat that leaves frequently from Rapallo and Santa Margherita Ligure, or from Camogli and Genoa, and can be easily visited on foot. The village of PORTOFINO boasts a centuries-old history; first Pliny the Elder speaks of it, describing the village as founded during the Roman Empire with the name of Portus Delphini. From the 13th century, the village will later become an integral part of the Republic of Genoa, becoming a shelter for the Genoese merchant navy thanks to its natural port.

PIAZZETTA
Whether you arrive by sea or by land, the Piazzetta of

PORTOFINO, the main square of the village, is certainly the first point where you will stop. Descending from the promenade running alongside the village, take Via Roma, the main street of Portofino, where you will get the chance to admire the oratory of Our Lady of the Assumption, now house to several art exhibitions. Once in Piazza Martiri dell’Oliveta, the original name of the renowned Piazzetta, take a walk under the arcades with shops, boutiques and restaurants.

ST. MARTINO’S CHURCH
On the back of the Piazzetta stands the Church of San Martino, built in the 11th century in Lombard Romanesque style, and which owes its present appearance to various renovation works that took place in the 19th century. Inside, the church houses several paintings and sculptures, such as the wooden group depicting the Deposition of Christ by the Genoese sculptor Anton Maria Maragliano or the Madonna del Rosario canvas

dating back to the Genoese school of the 18th century.

PORTOFINO is also worth visiting for its naturalistic richness. Indeed, thanks to the paths that run along the woods behind the village, it is possible to reach less-travelled attractions of the archipelago. The Punta del Capo Lighthouse is exactly one of those; located overlooking the sea on a cliff, the lighthouse can be reached following a path that goes into the woods and that begins directly from the Piazzetta. Surrounded by maritime pines, the view will leave you breathless.

Let’s dive into the GENOESE
traditional culinary culture
with two typical recipes to try at home!

For the Stuffing: Wash and cook the chard, borage and spinach with a little salt. Chop the cooled vegetables and mix them with the quail, Parmesan, eggs and marjoram. Season with salt.

For the Dough: Prepare the dough with flour, eggs and white wine by rolling out a very thin sheet: cut squares of about 12 cm on each side and place a small pile of filling on each. Close the dough into a bundle and seal the edges with a slight pressure of your fingers, then let it dry. In the meantime, prepare the sauce by shelling the walnuts and freeing the kernels from the film.

For the Sauce: Pound the kernels in a mortar with one or two cloves of garlic, a little marjoram, the breadcrumbs, parmesan and oil until a fairly thick cream is obtained.

Cook the pansoti for a few minutes in salted water, then season them with the sauce and mix everything perfectly. Serve hot.

Rinse and dry the basil. Pound some leaves in the mortar, adding the others gradually, so that it will be easier to chop them. Add the pine nuts, a few at a time, then a sliced clove of garlic and a pinch of coarse salt. Pond all together with the ingredients. Add the cheeses and mix well. Pour in 40 g of oil, working the pesto until it is homogeneous and becomes compact. Cook the pasta in boiling salted water. Thin the pesto with a tablespoon of cooking water to make it creamier, then drain the pasta and season with the pesto, completing to taste with whole basil leaves.

For the perfect pesto, use basil leaves from Pra ‘(PDO product), a district of Genoa, and delicate extra virgin olive oil from the Ligurian Riviera.

Should you need any ADVICE
on WHERE TO EAT or WHERE TO SLEEP in PORTOFINO
we will be more than happy to help you!

The well known OSTERIA RIFRULLO was opened in 1990

Spezzatino alla Buttera is a typical recipe of the

Designers often get inspired by past artistic move

Art Deco, sometimes referred to as Deco, is a styl

Din's Gin comes from Tuscany, Italy! The quest for

When talking about cocktails, bar accessories are